Whisper is an automatic speech recognition (ASR) system developed by OpenAI, released in 2022 [1], that is capable of generating transcriptions and translations using an audio track as input. [2] OpenAI stated that the model has been "trained on 680,000 hours of multilingual and multitask supervised data collected from the web," approaching "human level robustness and accuracy on English speech recognition." Unlike DALL-E 2 and GPT-3, the research lab has made Whisper publicly available as an open-source project on Github. [1] [3] [4]

In the fields of artificial intelligence (AI) and machine learning, speech recognition is still a challenging problem. [5] However, highly capable speech recognition systems have been developed and are used by major corporations like Google, Amazon, and Meta. However, according to OpenAI, Whisper is different from those, since it was trained on hundred of thousands hours of multilingual and "multitask" data gathered from the web, increasing its robustness in the recognition of accents, background noise, and technical language. [3] [5] [6] This leads to an almost flawless speech transcription across different languages, even with poor-quality audio or excessive background noise. The model supports transcription for 99 languages and translation from those languages into English. [6] While OpenAI's analysis of other languages besides English is not comprehensive, users have reported good results. [7]

Most of the software's audio dataset is comprised of English but about a third is from other languages. The increased capabilities of Whisper in speech recognition come from having a large and diverse dataset. [1] Indeed, the model works better than commercial ASR  systems like Alexa, Siri, and Google Assistant. [8]

Whispers' unprecedented high degree of accuracy and ease of use will allow the integration of voice interfaces on a broader number of applications. [1] The model was released with five different sizes with the tradeoff being between accuracy for speed (the smallest model is approximately 60 times faster than the largest one), giving the option to run it on laptops, desktops, mobile devices, or cloud servers. [7] Also, due to its open-source nature, developers and users can integrate it on their servers, increasing privacy. [9] 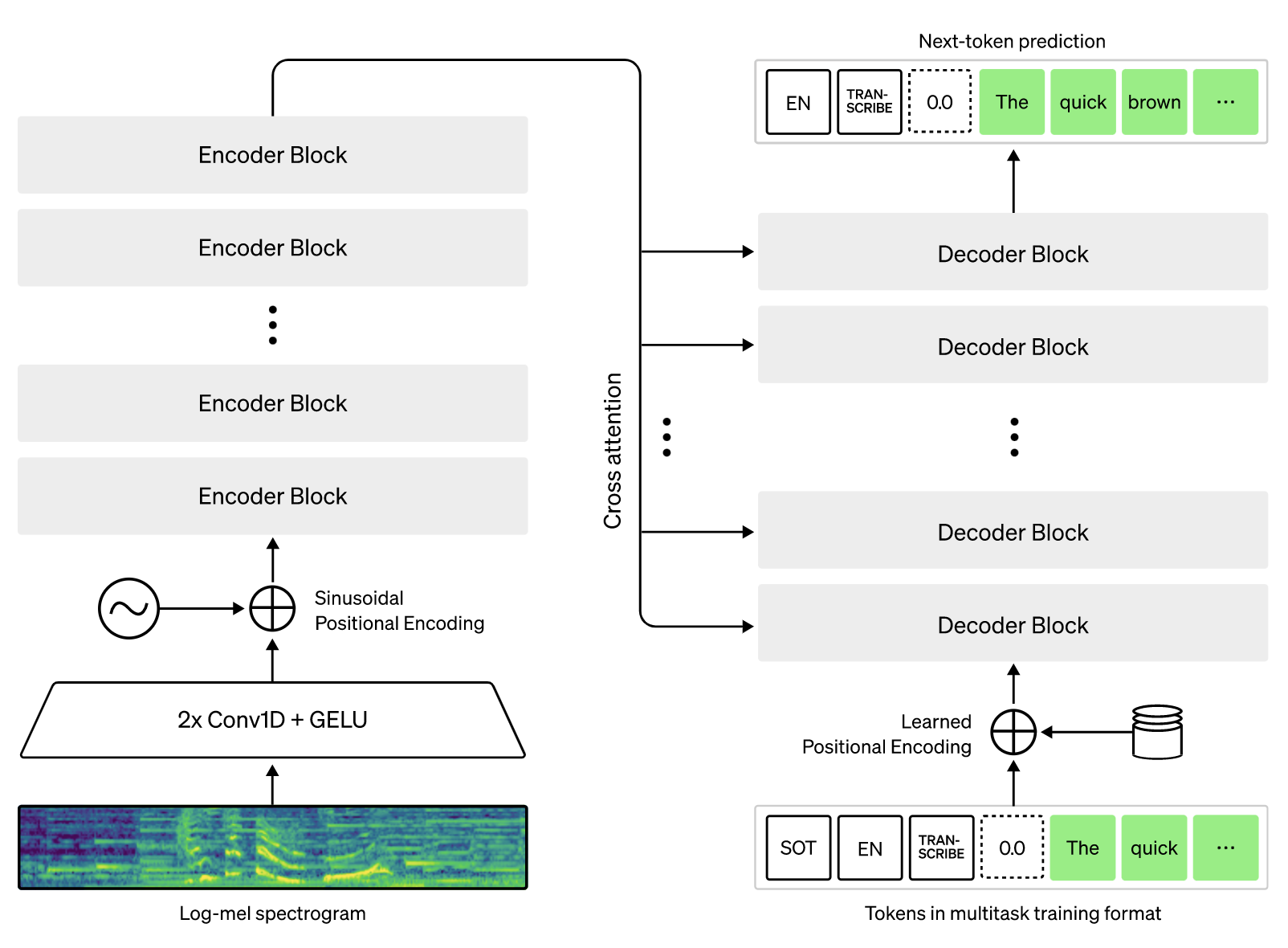 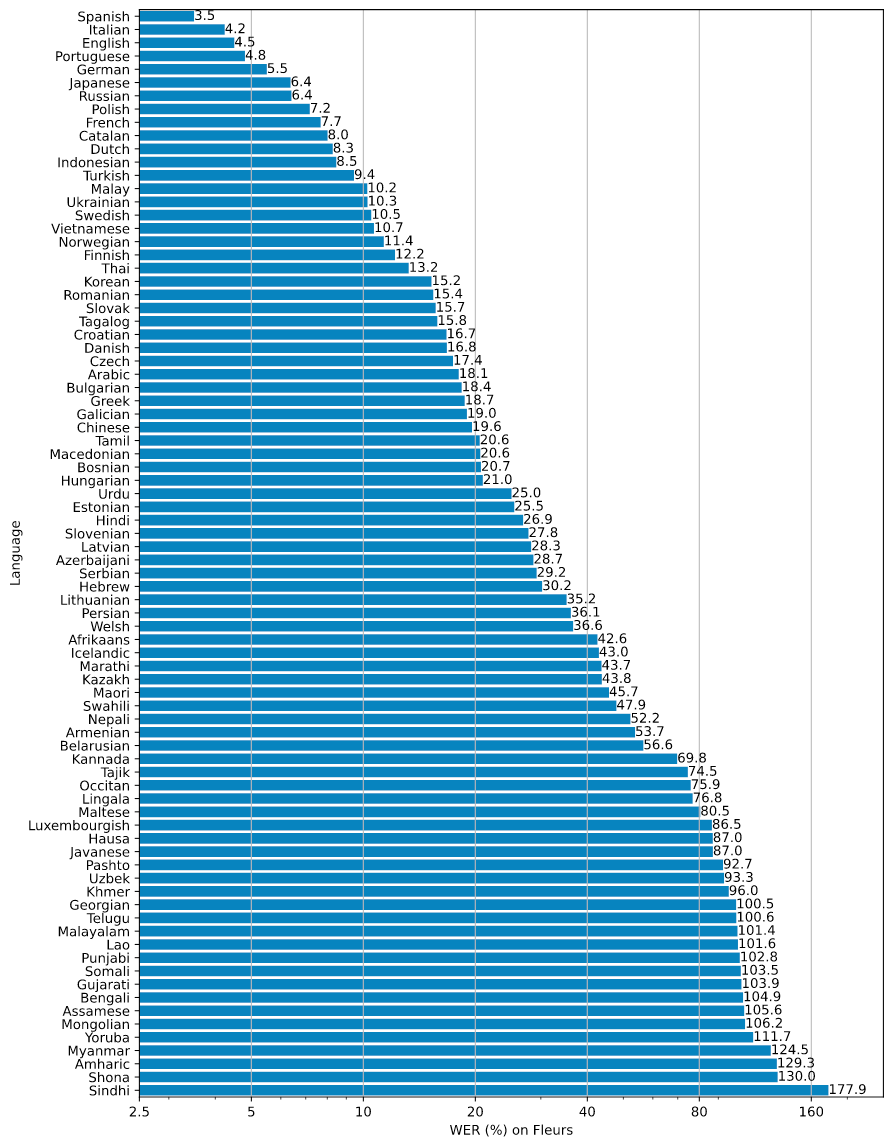 Figure 4. Whisper's WER as a function of language. Source: OpenAI.

OpenAI's ASR system has a classic built based on the transformer architecture, stacking encoder and decoder blocks (figure 1). [1] [10] [11] This is similar to GPT-3 and other language models. [11] The audio is split into 30-second pieces and processed one by one [1] [11] According to OpenAI, the audio chunks are "converted into a log-Mel spectrogram, and then passed into an encoder. A decoder is trained to predict the corresponding text caption, intermixed with special tokens that direct the single model to perform tasks such as language identification, phrase-level timestamps, multilingual speech transcription, and to-English speech translation." [1]

Since Whisper was trained on more than 600,000 hours of multilingual and multitask supervised data from the web, a type of training akin to GPT-3, it results in the ASR system becoming a large and general audio model. [11] This contrasts with smaller fine-tuned training datasets or ones that use broad but unsupervised audio pretraining. Therefore, Whisper does not beat models that specialize in LibriSpeech performance but its zero-shot performance is more robust and with 50% fewer errors than those other models. [1]

The system has five models (figure 2) with four of them for English-only applications. Accuracy is directly proportional to the size of the model and speed performance is inversely proportional to it. [3] The AI program can be used on both CPU and GPU but the larger models' performance will lack on slow CPUs. [12]

On comparisons of Whisper's accuracy using word-Error-Rate (WER) to state-of-the-art speech recognition modes, it achieves excellent results (figure 3). This opens research possibilities in the field of ASR since it's an open-source model. However, besides Romance languages, German, Japanese, and a few others, the WER is still greater than 20% (figure 4). [12]

Whisper has various possible applications but its primary use is for AI researchers that are studying generalization, robustness, capabilities, biases, and limitations of such models. [5] Being an open-source project also makes it easier for research on deep learning models and in helping create specialized applications. [7] It can also be a solution for ASR developers. OpenAI has stated that "while Whisper models cannot be used for real-time transcription out of the box, their speed and size suggest that others may be able to build applications on top of them that allow for near-real-time speech recognition and translation." [5]

The model is already being used in applications for YouTube transcription, a service provided by Hugging Face which hosts Whisper and makes it available through API calls. Furthermore, the program can be fine-tuned for new applications like improved ASR performance in a language that is not well supported, to increase medical or technical terms recognition, speaker verification, sound event detection, and keyword spotting. [7]

To install Whisper, execute the command